To MOOC or Not to MOOC?

It was a gloomy Halloween morning. All the pumpkins were carved and lighted. Witches on brooms, ghostly apparitions and tombstones littered front yards in neighborhoods across the land.

And I, nestled all snug next to my computer, was able to tell my witch story in a Massive Online Open Classroom (MOOC) from the comfort of my home. 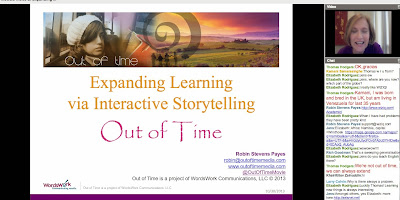 Out of Time, as I've recounted in an earlier post, is the story of a teen whose ambitious goal is to hack time travel to meet her idol, the Renaissance genius Leonardo da Vinci. This self-proclaimed modern-day Renaissance genius has plans from Leonardo's own notebooks that she has determined were his own dreams to crack the time code. But Leonardo had neither the science--harnessing the neutrino, identifying the Higgs boson--nor the technology of iPad, Facebook and Twitter to bring that dream to life.

Charley Morton, with a little help from her friends and science co-conspirators, does. Thus, the screenplay version of the Out of Time adventure begins.

But Out of Time is no mere scifi-fantasy screenplay. It is emerging on Twitter, on the Web, in videos and, soon, as an interactive multimedia learning experience for teens and teachers.

So when Nellie Deutsch, of Moodle MOOC 3, and Greg Limperis, of TechinEDU, invited me to create a MOOC around this transmedia storytelling experience as one of the Connected Educators Month offerings, I was thrilled. When Nellie posted the page on her WizIQ hosting platform, the numbers of interested learners jumped--ultimately to close to 3,500 people.

I was even more excited--and more than a bit nervous--to learn that participants in our Halloween Tale hailed from around the globe: U.S., Canada, U.K. Venezuela, Columbia, Tunisia, Vietnam, Sri Lanka. (View recorded class here: www.wiziq.com/online-class/1435994-expanding-learning-through-interactive-online-storytelling-out-of-tim)

The class was warm and welcoming, and Nellie was the perfect host. I enjoyed the experience and now look forward to the sequel, Transmedia Storytelling: Learning through Narrative Engagement Out of Time--this one in time, for Connected Online 2014 on Saturday, February 8 at 4 p.m. EST.

And jump into the #TwitterFiction story @OutofTimeMovie on Twitter. After all, Charley can't jump Out of Time without you!

Posted by Robin Stevens Payes at 10:22 AM No comments: